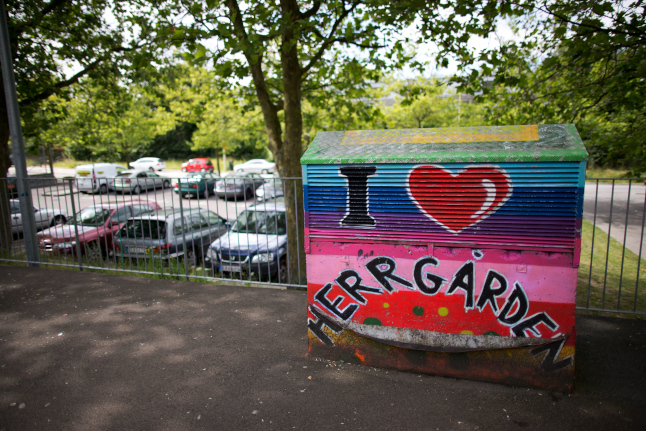 The Local: ‘Opinion: Do series such as Young Wallander feed the Malmö myth?’

“Far-right international media touts Malmö as a dangerous, crime-ridden city and because of this, TV shows like Young Wallander have to tread carefully, writes freelance journalist Saga Ringmar.

In the Netflix series Young Wallander, released this autumn, we follow the young detective (played by Adam Pålsson) solving crime in a bleak Malmö. This Malmö is full of criminal activity, anti-immigration riots and nightclubs where half-naked people writhe around in cages. However, in a world where far-right media touts Malmö as a criminal hub with immigration gone awry, a series like Young Wallander must tread carefully.

In far-right media, Malmö is used as a cautionary news headline to show the dangerous impact of immigration. Fox News alleged that Malmö is the “rape-capital of Europe” dotted with supposed “no-go zones”, areas so dangerous that police dare not enter. So writing Young Wallander, a show about crime and immigration in Malmö, is a precarious task where writers have to be careful not to pander to alt-right ideas.

Of course, a lot of the Malmö myths can be easily rebuked. Malmö – as the rest of Sweden – can attribute its high rape cases to legislation which counts cases according to each incident rather than each perpetrator and where the judicial definition of “rape” in Sweden covers more situations than the rigid definitions elsewhere. Apropos “no-go zones”, as The Local has reported, Malmö’s police have explained that they do indeed cover all areas of Malmö. Interestingly, statistics on Malmö’s crime rate can be easily manipulated online to tell whatever story suits you.

However, the Young Wallander series flirts with these far-right tropes. Wallander is in pursuit of a refugee who has killed a white Swedish teenager in an anti-Swedish hate crime. This story sounds like something straight out of Breitbart and makes for an uncomfortable first three episodes.

Halfway through the series (…and here comes the spoiler!) we realise that the refugee was coerced and the true culprit is not a foreigner at all. However, since the show spends half its time playing with the trope of a refugee as the begetter of Malmö’s crime, the stereotype is ultimately challenged but the true nature of Malmö’s criminal activity is never fully developed.

What are the underlying factors that contribute to the crime and low-income in Malmö’s vulnerable areas? This is not explored properly. With a show that sees the world through the gaze of a white Swede, we can only see so far. Discrimination, socio-economic inequality and segregation are some of the biggest causes of crime in the city. However, these ideas are never fully fleshed out in the series. All we know is that we thought the refugee was guilty while he was actually being coerced. End of story.

The show is quick to use Malmö, and especially the Rosengård area, to create a dark atmosphere with rampant crime and shadowy figures in hoodies, which feeds into a hyperbolic narrative.

What is it actually like to live in Rosengård? Although far-right, fake news outlets like Infowars and Breitbart describe Rosengård as an area where “ethnic Swedes dare not tread”, the reality is far more complex. Manne Qvillberg who has lived in Rosengård’s student housing, describes it as a place where, sure, gang violence stirs between gang members and drunk guys are sometimes too loud at night, but also a place with families and student life. He explains, “…there certainly is this media boogeyman about Rosengård… that you shouldn’t live there, there is just a bunch of crime and you have to wear a [bulletproof] vest or something…that definitely isn’t true…That is not to say it doesn’t have problems, but I think those problems are highly exaggerated”.

Sema Ekinci is 30 and has lived in Rosengård her entire life, first in the high-rise apartment buildings and now beside them. She explains that even though there are areas of Malmö with far more drug dealing or shootings, Rosengård gets lumped together with these areas.

Sema says that in the Young Wallander show, “it’s like they are trying to create a picture of a ghetto and children in a ghetto that maybe exists in other parts of Europe, but doesn’t actually exist here”. Manne says a similar thing, “I feel like the person who wrote [Young Wallander] already had an idea of how they wanted to depict the place”.

Both of them are right to think this way. The fact that most of the scenes are filmed in Lithuania and not Rosengård means that the writers could create Rosengård exactly as they imagined it, rather than how it actually is. An often forgotten detail in the media is Rosengård’s unique sense of community that other areas in Sweden lack. “Swedes generally aren’t very social people,” Manne explains, “But when I moved in there I noticed immediately that there was a whole different sense of socialising than what I grew up with…. [You] talk to your neighbours, the people you see everyday, the people who work there, and it’s just generally a more tight-knit community”.

This sense of community is what makes Sema feel safer in Rosengård than anywhere else. Working the night-shift in Rosengård, Sema would frequently walk home in the middle of the night. She explains, “I know who lives there so I don’t react if I see a group of guys in hoodies outside of an apartment building, I know who they are even if I have never met them. So there is nothing to be afraid of”.

An important part of Rosengård, Sema notes, are the kids. “Young people take up a lot of space in Rosengård” she says, “So that might mean that the evenings are rowdy…I don’t mean that the parents aren’t a part of their kids’ lives, but just that they don’t feel like they have to supervise their every move”. She adds that the many teenagers and children hanging out in Rosengård might appear strange to people from other areas. She can understand that maybe big groups of teenagers in hoodies may seem intimidating. Sema, a math teacher in middle school, is far from frightened. “They could practically be my students!” she remarks.

In contrast, the Young Wallander series depicts Rosengård as this bleak depressing place where there is no fun to be had and completely ignores the social aspect of the area – as do most media depictions. ‘I love Herrgården,’ reads this graffiti, referring to one of the most infamous areas of Rosengård. Photo: Andreas Hillergren/TT

In fact, Rosengård is a place where kids swing on swings, grandmas push their shopping carts and neighbours chat to each other on the street. Of course, criminal activity might bubble under the surface but the Netflix series is unable to show us this duality. Nuance is perhaps a lot to ask of a crime detective show. However, the entire point of Henning Mankell’s original books is to show how quaint, Swedish neighbourhoods can have unpleasantries lurking behind the surface. Surely it is possible for a detective show about Malmö to exhibit similar dualities?

To the show’s credit, a crucial element they get right in depicting the crime in Malmö is that the biggest victims are the vulnerable people themselves. Far-right sites try to tout criminal activity as something predominantly infringing upon white Swedish life. However the biggest victims are those who live in these vulnerable areas. After the protests in Rosengård this summer in response to the burning of Korans, pictures of bruised and bloody white Swedish women supposedly injured in the riots circulated in India. Turns out these were old pictures of separate incidents outside of Sweden. This type of fake news portrays crime in vulnerable areas as something inherently anti-Swedish.

In Young Wallander, however, the victims are vulnerable people or those intertwined in the world of crime. A teenage boy with a foreign mother is falsely accused of killing the Swedish teenager. The refugee who did kill him was coerced in fear of deportation. Even the Swedish teenager who is killed is involved in drug-selling. Real statistics show a similar thing. One study found that from 1990-2017 men from disadvantaged areas were overrepresented as both perpetrators and victims of lethal violence. Young men who join gangs tend to have a bad relationship with their family and school, and are looking for a sense of belonging.

What we actually need are young Malmö-dwellers with firsthand experience of Rosengård and other areas writing for Netflix. Hopefully then, when they depict criminal activity, they are able to portray it with all its complications. Without accurately portraying an area like Rosengård or the system of segregation and systemic racism that begets crime, we leave ourselves wide open to racist, fake news about Malmö as a crime-ridden hellhole.